When multiple Gr1-winning and newly awarded Victorian Horse-Of-The-Year Scenic Blast scored victory in June’s UK Gr1 King’s Stand Stakes at Royal Ascot, he joined the ranks of stellar sprinters Takeover Target, Miss Andretti and Choisir in becoming the 4th Australian-bred sprinter in the last 7 years to win the race. Yet, had Perth based trainer Danny Morton not made use of the E-trakka system in his training program, the 5YO gelding may have been trained as a stayer.

E-trakka uses heart rate monitors and GPS trackers to generate charts informing trainersabout their horses’ fitness and ability to race. Creator Andrew Stuart has worked closely with Morton for several years, a relationship stemming from Morton’s initial interest in the product at the beginning of Scenic Blast’s career. “When we were doing our trials and testing the electronics, Danny became very interested in it…I met him at the track and we started doing reading in the days when Scenic Blast was a rising 2YO,” said Stuart.

The core information is totally relative to the coal face industry – the results mean something and they give valuable information to the trainer. There is huge potential.

Stuart described how initially, as Scenic Blast seemed to be relaxed during work, Morton was considering training him as a stayer: “Traditionally, when a trainer sees a relaxed horse they presume that they’ll cover more ground, that they’re distance horses… Scenic Blast is extremely relaxed – naturally in Danny’s head he thought the further the better.”

However Stuart had taken 70-80 readings that indicated that Scenic Blast had a massively high peak speed, a sign of his equally massive potential as a sprinter (his highest speed was 71.9km/h), and Morton changed his plans. Once per week on several occasions leading up to January’s Gr1 Coolmore Lightning Stakes, he was exposed to high speed short duration workouts to emphasise his natural speed. He went on to win the race in an upset 1-length victory. 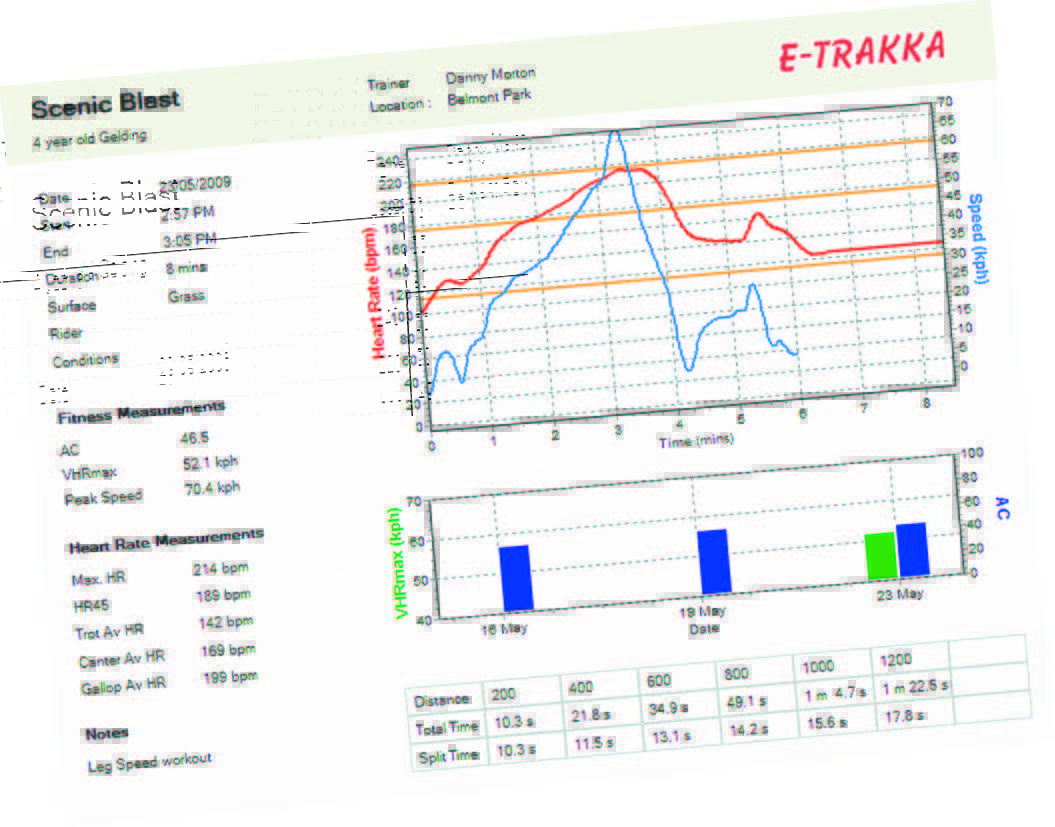 The E-trakka system incorporates several elements: the E-trakka saddle blanket, complete with heart rate monitor and GPS tracker, records accurate data each second that is then downloaded to a computer with software that decodes the information. This allows trainers to view graphs and prints which, when analysed, reveal peak speeds and heart rates, and provide invaluable information about the horses’ fitness levels.

A trainer and former jockey who routinely uses heart-rate monitors in his training, Stuart developed the system after becoming interested in modern sports medicine training principles. He began developing the product after collaborating with equine researcher Dr. David Evans and several engineers. His knowledge of thoroughbred training and racing has been an important part of making the system work for other trainers. “A professor does a lab study on 10 or 15 horses out in the field, but he can’t explain the concept to the trainers because he doesn’t understand the horses,” he said. With the E-trakka, he hopes to bridge the gap between sports science and traditional training.

Morton’s support, and that of other trainers who have embraced the technology, has been vital to the system’s success. And why shouldn’t they embrace it, heart rate and speed information has been used for years to refine the training and monitor the fitness of professional athletes. For Stuart now, the most important thing to do is increase awareness about the product and the potential use of the data it produces: “Because the trainers hadn’t been exposed to that knowledge before and had no way of applying it to the field, they’re not aware of the potential of E-trakka, and the potential of the knowledge.”

And Stuart believes that potential is enormous: “The core information is totally relative to the coal face industry – the results mean something and they give valuable information to the trainer. There is huge potential.” Yet he remains wary of the perception that a system like E-trakka will take over traditional methods of training, although this is far from his intention. “We’re not trying to take the job away from the trainer… What we’re doing is giving the trainer more knowledge about the horse,” Stuart said. “What we’ve seen with E-trakka is that sometimes there is something going on inside the horse that we don’t know about, that would help them make better decisions.”