TAKEOVER TARGET SHOWED SIGNS OF GREATNESS BEFORE BEING SOLD

TAKEOVER TARGET SHOWED SIGNS OF GREATNESS BEFORE BEING SOLD

The horse racing industry is riddled with many stories of “If only …….”. The story of Takeover Target is just one such story for the team at E-Trakka. E-Trakka has been developed to give Trainers, Owners and Veterinarians information on the fitness of their horses and their racing potential. To tell the story of how E-Trakka missed the potential of Takeover Target and how he became owned and trained by Joe Janiak, we must go back to the early stages of development of the Global Positioning System (GPS) and Heart Rate (HR) monitoring system developed by the former jockey and trainer, Andrew Stuart.

In the early stages Andrew could not get any funding for the development of his idea and he literally spent a decade in self-funding his dream. In the late 1990s Andrew managed to get the support of Associate Professor David Evans from the University of Sydney, who helped get development funding from RIRDC (Rural Industries Research and Development Corporation – which by the way receives funding from the racing industry) to help develop the idea.

Dr Evans organized a Masters thesis project for a student to investigate the GPS / HR system. This student was Dr Helen Gramkow, a Brazilian veterinarian who was based at the late John Morish’s stables in 2003. The objective of Helen’s work was to record data from thoroughbreds in training in a commercial racing stable. During 2003 and 2004 Helen tested literally hundreds of horses and helped develop the science behind the software of E-Trakka. One of the interesting things to come out of Helen’s study was a relationship between prize money won and a horse’s physiological fitness score known as VHRmax.

For simplicity VHRmax, is the velocity at which a horse reaches its maximum heart rate when galloping. The results of Dr Gramkow’s work showed that horses with a higher VHRmax earn more money. It was interesting that a separate study by Japanese workers at the Japan Racing Association, which was presented at the Asian Racing conference in Seoul May 2005, also showed that racehorses with higher VHRmax won more prize money.

Testing on Takeover Target, which was subsequently purchased by knockabout trainer Joe Janiak for just $1400 as a tried but unraced horse, later showed his test results – which records a Velocity Heart Rate Max reading – to be well above that of the average galloper (see graph 1).

Takeover Target has since gone on to be a proven multiple Group 1 performer in Australia, and in Japan, plus he also won the Gr 2 King’s Stand Stakes at Royal Ascot. As a result he won the Global Sprint Challenge.

The Velocity Heart Rate Max (vhr/max) pinpoints the speed a horse is travelling when it reaches its maximum heart rate. Ranges 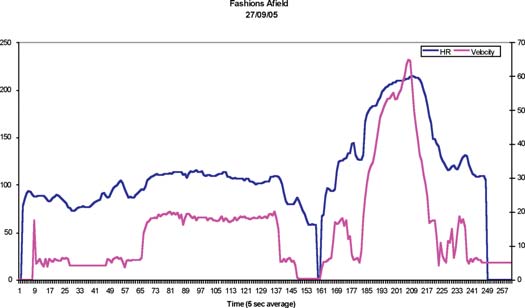 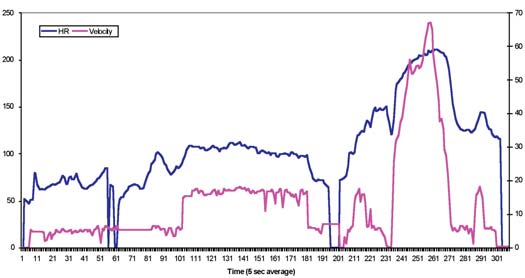 E-Trakka is a benefit for trainers for a number of reasons including:
# Race results and performances are directly related to fitness measurements recorded.
# Fitness readings identify downward trends which could (and do) indicate problems before the horse is severely limited in capacity.
# Ways of determining the best distance and class suitable to the horse.
# Gives the trainer the ability to confirm and monitor training sessions without having to be physically present.

E-Trakka is now responsible for over 2000 training session readings from a widespread number of horses including the three-time Melbourne Cup winner Makybe Diva after its retirement was announced last November. The fitness measurement recording on Makybe Diva, which was recorded several weeks after the Melbourne Cup and when the mare had been let down, still showed a remarkable reading for her stage of fitness and more importantly that the mare was responsive to training.

E-Trakka showed Takeover Target, on 29 May 2003, as having a VHR/max reading of 55.4kph. More significant was the graph which showed heart rate and speed almost superimposed when the horse was accelerating. This type of graph is a feature of all Gr 1 horses.

Graphs Two and Three are from other group one horses showing a similar trend. The type of graph shown by Takeover Target, the ETrakka team now knows to be that of a potential super horse. As a leading analyst in the E-Trakka team said recently IF ONLY we had been able to analyse the data then with the software we have now, we could have picked up a Gr 1 performer for a song.

Those sort of readings returned by an E-Trakka test on a young horse now would have a trainer very happy. Why not give it a try? E-Trakka has a fully integrated system, consisting of a GPS velocity
(speed) / position monitor, a high performance heart rate monitor, and an easy-to-use computer.

The in-built GPS and Heart-rate monitor, and the E-Trakka saddle blanket, accurately records a horse’s speed, position and heart rate once every second during an exercise session. The gathered measurements are then displayed in easy-to-read reports.

An optional Rider’s Display Unit provides a jockey with immediate measurement of both velocity and heart rate, allowing a horse to be worked at a pre-determined speed or heart rate on instruction
from the trainer. With E-Trakka, you can collect and retain the information on any horse you use the system on and keep a firm eye on the progress of your horse.

Not only does it identify when your horse is on the way up and set to perform to its maximum level, it also identifies down-trends in a horse.

E-Trakka information told us that Lotteria was a Gr 1 horse before she had her first start.

In just her first racing preparation Lotteria scored a dominant win in the Gr 1 Flight Stakes at Randwick by seven lengths.

As an older mare Lotteria ran second to Makybe Diva in last year’s Cox Plate before winning a Gr 1 race at Flemington following that.

But test results recorded by E-Trakka prior to Lotteria returning for her last preparation indicated she had not come back. The mare had not improved with racing and training and as a result was retired to stud. Vital information provided by E-Trakka ensured connections didn’t take any risks that Lotteria would fall from grace on the track and she heads to stud as a valuable broodmare. (Table 1)

“Testing throughout her career she kept increasing with fitness. 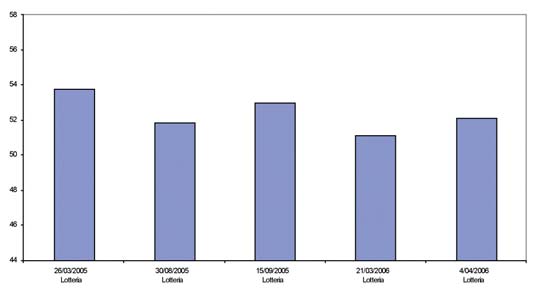 Not all horses show that, but the better horses do. She also demonstrated at the end [of her racing career] that she wasn’t up to scratch and kept going backwards.”

So at just $5500 for the complete basic E-Trakka system, be a leader and innovator and use the latest most advanced technology available to the racing industry.

Don’t take the risk of having a potential Takeover Target slip through you hands. Identify your next champion galloper with the help of E-Trakka.